During the last few years, authors and graphic designers have been experimenting with French grammar in order to “debinarize” its written form. Since the 17th century, French has been based on the so-called neutral masculine’s universality – and its adage “le masculin l’emporte” (masculine wins). This norm has been imposed over other grammatical rules previously in use, such as the proximity or the majority principles¹. The theory of performative utterances² – and its many sequels – invites us to consider the power of realization of language itself. It makes us feel that language structures our representation of the world, our reality, and constitutes one of its main infrastructures. So that a statement is never neutral nor inoperative, rather, it is a generator of tangible realities. 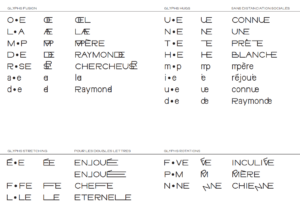 The Norm in the Machine

The ergonomics and user interface design of new technologies delude us into a machine world devoid of human beings, in which robots seem to be autonomous in their tasks. Moreover, their apparent fluidity of use masks the infrastructures on which they are based. For the digital management of text, it is the Unicode standard that governs and standardizes our exchanges. Based on the Latin alphabet, it is the basis for all software, messaging systems, and websites presenting text, in order to be readable anywhere and on all electronic devices. As it is incomplete and restrictive, Unicode is also the expression of a latino-centrism that is rarely interrogated. 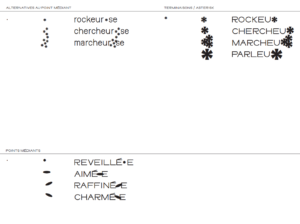 The social challenge of a minority resides in its possibility/capacity to represent itself with its own language, by developing, for example, alternative strategies based on the implicit norms of language that contribute to its minorization. Graphic design collective ByeByeBinary elaborates operational queer visibility modes to hack the binarity within the French language while using a fallow area of the Unicode standard. The starting point of this creative community is the graphic experimentation about inclusive writing, whose forms of action go beyond the one type design. In particular the collective works to make functional the non-binary glyphs designed by its members thanks to the QUNI initiative of common software practices, and while manifesting utopia right into the language, invites any typographer to join. 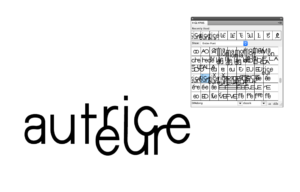 ByeByeBinary has made an inventory of about fifty inclusive fonts, eight of which have been unified and published under a copyleft license in an online type library. They explore various modalities of inclusivity³, of which I will present here the ligature. Allowing to replace the midpoint – and other punctuation marks used in French to mark gender flexions – with lines tying the letters together, ligatures trace to my eyes some lyrical attempts to debinarize language.

Their entwined tracings produce an aesthetic of love and sexuality, knotting together words and genders in their infinite realities.

Her flows into him.

In the moist languor of the e in the a.

Escaping their river bed, x and s are twisting within the flow.

The wave of the f crashes into the s.

The saliva foams, flows from the mouth.

The bodily fluids connect the bodies in an invisible slobbering network.

The full mouth’s kiss of a voluntarily unassimilable language. 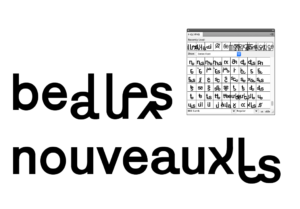 ByeByeBinary (BBB) is a Franco-Belgian collective, an educational experimentation, a community, a variable typo-graphic creation’s workshop, a network, an alliance. The collective was initiated in November 2018 during a common workshop between the École de Recherche Graphique (erg) and La Cambre (Brussels)’s typography workshops. They propose to explore new graphic and typographic forms adapted to the French language, including the creation of glyphs (letters, ligatures, median points, elements of connection or symbiosis) taking as a starting point, field of experimentation and research subject, the language as well as inclusive and non-binary writing.

Karin Schlageter (*1988, FR-CH) is an independent curator. She graduated from the Master « Arts et Langages » at EHESS in 2011. She was a member of the editorial board of the French cultural studies journal Poli-politique de l’image from 2010 to 2018. Recently, she was awarded a research grant in Art Theory by Cnap – Centre national des arts plastiques and a six-month residency at the Cité Internationale des Arts in Paris (2020-2021). In 2022, she is laureate of the residency program of the French Institute at Villa Kujoyama, Kyoto, Japan. She is currently working on a curatorial research project that focuses on the legacies of the vernacular in contemporary creation, and in particular their re-evaluation, transformation and updating by artists.